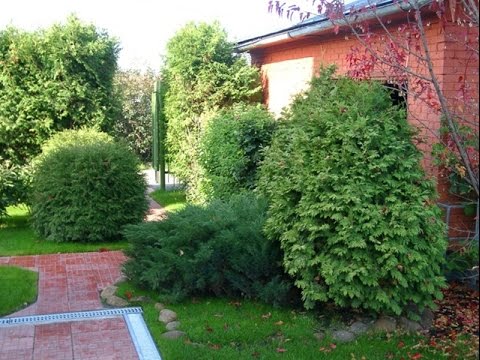 Mowing conifers is not as labor-intensive as the formation of fruit trees, because when caring for a needle-shaped crown, it is enough to monitor the observance of clear lines and not to worry about the safety of fruit buds. A completely different matter is the curly hairstyle of conifers, when real, real pictures are created from skillfully simple green bushes by skillful movements.

Decorative or topiarnaya forming haircut coniferous and deciduous trees - an ancient artistic technique that defines the style of compositions not only classic regular, but modern gardens. Clipped hedges and borders, ingeniously tangled labyrinths, exquisitely refined partners - all these design elements require clear lines and contours, which can be created only from plants with shallow foliage and dense branching. Softwoods fully meet all these requirements and are the ideal material for curly hairstyle. The range of conifers is huge, so it is not difficult to choose the best plant to create any of the “garden games”, be it a living sculpture or a wall of the “hall”.

In countries with a mild climate, deciduous plants can be successfully used for this: beech, privet, boxwood, holly, but even there you can’t do without conifers. Not a single deciduous plant has been able to maintain the shape of dense walls, bosquets and arches as successfully for decades cypress и yew.

In Europe, especially in large gardens of the regular type or parks, which were divided into old castles, it is their curly hair that is given special attention. Unfortunately, yews and cypress trees are of little use for cutting in the northern gardens, but spruces, junipers and western thuja are an excellent substitute.

All types of fir trees are equally suitable for cutting and forming conifers, but more often others are used. Ale ordinary (Picea abies).

For hedgehog hedge, it is advisable to use only young plants with a height of about 50 cm or specimens of greater growth, but grown in containers. Disembarking is done in early spring before bud break or in autumn. If plants are grown in containers and have a formed root ball, then you can plant at any time.

Planting is carried out in one row at a distance 60-100 cm, depending on the size of the plants. A more dense planting is not desirable, since it does not give the fir-trees the opportunity to form full-fledged side branches.

The peculiarity of the formation of coniferous hedge from spruce is that it is imperative for plants to cut the apical shoots - this contributes to a more active growth of the lateral and preservation of the lower branches. If the tops are not trimmed, then this will result in the natural for spruce dying off of the lower branches, baring of the trunk and “baldness” of the hedge. To restore such a fence by pruning is impossible.

Pruned lateral branches 1-2 times over the summer during periods of active growth of young shoots. For haircuts use special scissors with long blades, but the cuts are always noticeable. A difficult, but more aesthetic way of pruning is to manually pick tender young shoots at the stage of their active growth. This method preserves the impression of natural form.

The easiest way to create a fence of spruce - planting compact varietal forms. They are expensive, but do not require a haircut and look truly luxurious.

Decorative haircut conifers do it yourself: figures from spruce (with video)

Spruce and suitable for artistic haircut. Complicated shapes are difficult to create, but pyramids, cylinders and balls are more than realistic. Work should begin with young plants that have reached a height of 50-100, see. They make a topiary haircut of conifers manually, shears are used only in extreme cases.

The main way is to pluck the buds of central growth on lateral shoots in autumn and their corresponding soft growths in early summer. When plucking the gains of the current year, strong shoots are removed completely, and weaker shoots are only partially. The plucking of the shoots provokes the formation of a large number of buds of the renewal of shoots of the next year, i.e. it increases tillering. When creating rounded figures, vertex shoots are regularly removed. When pyramids are formed, the apical shoots are retained only until the planned growth is reached, after which they are replaced with a weak-growth branch. When creating a longline pyramid with their own hands they use the natural turbidity of the arrangement of the branches and only reveal it by completely cutting off the extra small branches. To seal the tiers, regularly pull out all the strong young growths.

All types and varieties of junipers with a vertical type of growth are suitable for creating hedges from conifers, but forms with a columnar and pyramidal crown are especially valuable.

One of the most accessible and popular in the culture, no doubt, is Juniper ordinary (Juniperus communis). However, natural forms are protected by law, and, moreover, wild junipers are extremely poorly taken root. Therefore, it is necessary to acquire this plant in nurseries. Junipers grown in containers, take root perfectly and can be planted at any time. The only requirement for successful rooting is the presence of a formed root coma. Single-row planting at a distance of 50-80, see. The size of plants for hedgehog can be anything. Luxury growth can be achieved only on a well-drained area with loose soil. On heavy clay soils and in flooded areas, junipers will die.

Haircut these conifers spend scissors one or two times a year. They shorten both side branches and tops. Particularly valuable fences from compact varietal junipers - they practically do not require shearing and retain their shape without the intervention of a gardener.

The best varieties of juniper for hedges are columnar:

Of all the types of thuja for the "northern" garden the most suitable hardy and unpretentious Thuya western (Thuja occidentalis). This is a relatively inexpensive and truly versatile material for both hedges and curly hairstyles. A huge number of varieties of crown in shape and color of needles of this species allows you to create clipped figures and hedges not only of different height and shape, but also of different colors.

To create high hedges of coniferous plants, trimmed columns-spirals and columns-tiers use dense varieties, such as:

For compositions of medium height are perfect:

The only and more than serious disadvantage of such compositions is their high cost.

Cheap, but very high-quality hedge can be created from half-sorted or species thujas. Material is easy to grow from seeds or cuttings. Young plants are grown on razvodochnogo ridge, and when they reach the height 40-60, see planted in a permanent place.

Thuy unpretentious and able to grow on almost any soil. They put up with heavy clay and poor sand, grow well both on dry and over-wet areas. And yet, for successful development, plants need fertile loose subacid loam with sufficient, but not excessive, soil moistening.

Thuys for trimmed conifers are planted in the 1-2 series at a distance of 40-50 cm between the plants. In the first year they are given the opportunity to grow freely, they do not cut their hair. In the second, and sometimes in the third year, only the tips of the apical shoots are trimmed, causing tillering. In the third year, the top shoots are cut on a mandatory basis and begin to form the lateral sides, cutting the branches protruding beyond the limits of the specified dimensions. After the hedge has reached the desired height, begin regular formative trimming of coniferous trees. Thuis grow continuously throughout the summer, and they can be cut repeatedly, but in practice they do this no more than three times per season.

Formation of coniferous trees in the style of bonsai

Talking about the type of formation of conifers in the style of bonsai, the founders of which are Japanese, we do not set ourselves the task of teaching our gardeners its classical techniques. We just want to show that every gardener, having certain knowledge of growing conifers, is able to give them unusual, unconventional forms of growth.

It is not necessary for the decorative cutting of conifers to adhere to the established rules. Quite interesting results can be achieved by working in this direction with larch, spruce, pine treesjuniper. All of them are very plastic, keep well the shape created by cutting, stretching, laying on the side branches of the wire, bamboo sticks and hanging loads.

У larches European time remote terminal escape is the first step to the creation of garden bonsai - nivaki. In the future, with the help of ordinary wire in the right direction, one of the auxiliary side branches is derived for the role of the leading runaway. After about a month the 2-3 stabilizes and the wire is removed. All other side branches are shortened, while fresh growths are regularly plucked or clipped onto them.

Stretching can be left for a longer time, periodically checking the branches for their attachment, if necessary, changing their location. Interesting forms in varieties of larch can be obtained by removing almost all the lateral auxiliary branches from the stem to the bud. The remaining small branches are also removed from those left on one bud from their trunks. When creating optimal growth conditions, larch trees can grow during the whole season. All growing shoots are pruned - pinch 2-3 times in the summer, thereby significantly increasing the thickness of both the left large side branches, and small, cut off near the trunk. At the same time, the terminal shoot is slightly shortened only once, in spring.

The height and direction of plant growth can also be adjusted using stretch marks. In firs and pines, by removing some lateral branches, as well as pinching growing shoots achieve similar results.

If necessary, use wire, stretching, hanging to the branches of special goods. Most of all for these purposes are suitable plants with a pillow, flattened form of growth. Some are also promising in this regard. tsugi Canadian.

The appearance of many varieties of western arborvita deteriorates with age, their shape becomes more sloppy. And here with the help of special pruning you can achieve good results by creating pretty neat pyramids, ovals, grounds. And if you cut all the lower small branches from the trunk and larger lateral branches during the cutting of hvoynik with your own hands, you can get an interesting multi-barreled shape. The growth and shape of the crown is also regulated by pruning.