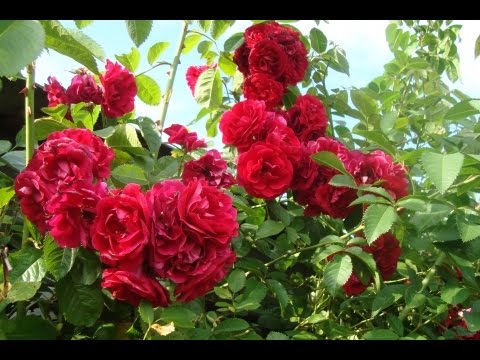 With climbing roses, varieties are associated with long shoots that tightly twist the arches of buildings, and their dense foliage takes us to the tale of sleeping beauty.

These roses really look impressive. They are especially impressive in the main flowering period, at the beginning of summer. Climbing roses cannot climb walls of buildings themselves. They have to help, planting a number of bushes or trees, on which the roses will climb up.

They twist and weave not like other plants. Climbing roses cling to support only thanks to their own thorns.

Like bush roses, modern climbing varieties are mostly remontant, but among them there are also blooms once. The latter grow lush because these varieties produce fresh long shoots throughout the whole year. Adventitious shoots and flowers grow only in the next year.

In remontant varieties of flowering roses, ovaries are formed on the tips of the shoots. These plants bloom several times a year, so the relative shoot must have time to fully grow. Only after that it blooms. Escape cannot grow endlessly. Therefore, dreams of beautiful roses hanging thickly from high arches or tree crowns can be realized only with once flowering plants. A short period of flowering once flowering varieties rewarded gardener luxury and wealth of floral splendor.

Below are photos of varieties of climbing roses, awarded the ADR quality mark, and the color of their flowers.

Grade "Dortmund" - the color is crimson with carmine open, with a white eye.

Grade "Flammentanz» - the color is purple.

When caring for climbing roses, not only trimming is important, but also the correct garter. Despite the fact that they are quite firmly cling to the support on their own due to the spikes, in order to give the correct direction they are better attached to the frame.

In comparison with the bush shoots climbing roses are much longer, and they themselves are much higher. In order that the plant playfully “climbed” on the wall and, moreover, pleased us with a rich flowering, special attention should be paid to the morphology of the plant at the initial stage of development. Young long shoots are directed so that the rose expands in width, in addition, they are fixed on the frame. If the shoots extend only vertically, then they will bloom mainly on the tops, and even in subsequent years. The more horizontal the direction of growth of the shoot, the less its tip grows, but the side shoots develop much more intensively. Then flowers form on them.

If, for some reason, the shoot will hang down and acquire an arched shape, then new growth will appear on the top of the arch that has formed, and the growth of the “original” top, which is now below, will slow down.

If curly roses grow freely, that is, without a frame, they form shrubs that can not fail to impress. Their shoots descend like branches of a weeping willow, new shoots grow on top of them, which over time overlap the old ones, forming as a result a huge flower ball.

How to trim once flowering roses

Just like spray roses, climbing roses are once blooming and remontant. Once flowering varieties differ intensive growth. This is due to the fact that fresh shoots that do not bloom, grow throughout the growing season. How to trim the curly roses, blooming once? Long shoots of such crops bloom only one year after planting. Flowers appear on the side shoots that are not formed in the first year. This means that when pruning you need to be careful not to damage long shoots.

How properly cut curly rose blooming once a season? You only need to remove old branches that bloom not sufficiently magnificently, if possible to the ground or even to a fresh shoot growing from the ground.

After that, remove only thin branches from the ground and cut short shoots to 3-4 buds, but only if the foliage of the plant is too thick. This will provoke a lush bloom. It is best to take these measures after the plant has faded. This is the optimal time, because the rose will have enough time left to produce strong fresh shoots next year. However, in practice this recommendation is neglected. In spite of the fact that this measure is biologically and morphologically justified, it is rather difficult to implement it.

At this point, the plant is full of foliage, and the individual shoots are so difficult to recognize that the risk of cutting something extra is great. In addition, it is hardly possible to remove trimmed parts from a thick bush without damaging the foliage. Therefore once blooming curly roses are usually pruned in the spring, because at this time of the year the effects of pruning are easier to notice.

This video shows a trimming of climbing roses that bloom once per season:

How to cut repairing curly roses (with video)

Flowers of repairing climbing roses appear on the tops of the long shoots in the year of planting, and then again, on the old side branches. Repairing curly roses should be cut regularly to stop the growth process at the right moment so that the tips of the shoots can bloom again.

During the growing season, shoots of remontant roses do not grow as long as the shoots once flowering. These roses grow to a maximum height in stages, over several years, due to adventitious shoots that gradually grow on the main ones. Therefore, spring pruning should be very careful. After a common pruning, remove the old branches to the base or to a fresh, long shoot growing from the base.

Thin and underdeveloped shoots should be cut to the bud, which looks promising enough to grow strong fresh shoots. Side shoots should be cut only when they interfere with the ventilation of the bush or do not let the sunlight through. Cut them to 2-3 buds and remove any weak shoots.

Watch the video on how to trim a repairing climbing rose, where all the subtleties of this agricultural practice are shown: