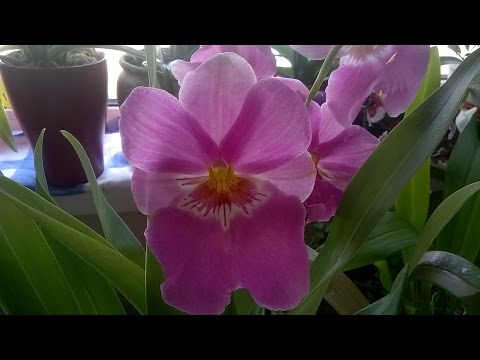 Characteristic difference Miltonia Orchids from related plants of the Orchid family is the presence of oblong-pointed leaves that are much thinner and longer than, for example, phalaenopsis. Miltonia flowers always have a contrasting core and most often rounded petals. When grown at home, this plant requires warm conditions.

Rod Miltonia (Miltonia Lindl.) 10 has species that are found in forests of central and southern Brazil, as well as in northeastern Argentina. These are epiphytic orchids growing on plains or in the foothills, with elongated rhizomes and monomial pseudobulbs laterally flattened and with two types of leaves - apical and rhizomatous. Inflorescences are lateral, few-flowered, with large primitive scales.

The flowers are quite large, often brightly colored. With photos and descriptions of the types and varieties of miltonia you can find on this page.

Miltonia (Miltonia) should not be confused with Miltoniopsis (Miltoniopsis) - closely related to high-altitude cold-loving Colombian orchids.

Miltothnia is white and brilliant

The endemic of Brazil, stem epiphyte, is found both in the cold forests of highlands and on the hot wooded plains. The pseudobulbs are ovoid, oblong, oblate, 6 — 8 long, cm, on the top they bear along the 2 belt-like leaf.

The leaves are linear-oblong, pointed, folded at the base, 18 — 30 long, see. Lateral inflorescences carry 3 — 8 flowers with yellow-brown petals and Miltonia Candida sepals and snow-white lip. It blooms in spring.

As seen in the photo, the flowers in this miltonia are 6 — 7 cm in diameter, the lip forms a wide funnel of white color with two pale purple-purple spots:

Epiphyte, originally from Venezuela and eastern Brazil, is found both in cold mountain forests and on wooded plains. The pseudobulbs are ovate-elongated, 8 long — 10 cm, flattened laterally, greenish-yellow, two-leaved. A characteristic feature of this plant are powerful, highly developed rhizomatous areas of shoots. Sometimes the roots of miltonia are rather long - up to 10, see

The leaves are linear-belt-like, rounded at the top, greenish-yellow, about 15 long, see. Inflorescences are single-flowered, up to 25 cm, covered with scaly bracts.

Pay attention to the photo - the flowers of this orchid are miltonia up to 7 cm in diameter, with white or cream petals and sepals and with a bright crimson-purple lip:

The lip is large, oval-oblong, slightly constricted at the base, with longitudinal purple stripes and a lighter wavy edge, 5 cm long and 4 cm wide. It blooms in spring and in the second half of summer. The duration of flowering of this type of miltonia is 3— 4 weeks. A large plant can develop up to 20 flowers simultaneously.

Types of Moreton and Varshevich Miltonias: Description and Photos of Varieties

For many years, this species was considered a form of miltonia resplendent with larger and brighter flowers than typical plants. Pseudobulbs are somewhat more flattened than brilliant miltonia, the rhizome shoots are shorter, covered with several scaly leaves.

Flowers diameter 10, see. Sepals are widely spaced, and the petals are strongly laid back. The color of the segments of different clones may differ slightly, however, mainly petals and sepals of plum-purple or raspberry-purple, and petals also with a bright spot at the base.

Look at the photo - this type of miltonium has a large lip up to 5 cm, lighter than petals and sepals, pink-purple with darker longitudinal veins:

The white calyx on the column, as well as the yellow keels at the base of the lip, contrasts with the general dark background of the flower, further aggravating its deep dark purple tone. In culture, it blooms from the second half of summer to mid-autumn (August-October).

The duration of flowering of one inflorescence is about 6 weeks.

Homeland - Central America (from Panama to Peru). It settles on the butt parts of the trunks of small trees and shrubs, as well as on moss-covered stones at a height of 700 — 1000 m above sea level. The pseudobulbs are oblong, flattened, length 8 — 10 cm, 1 — 2-leaf.

The leaves are linear-oblong, blunt at the end, length 10 — 14, see. The inflorescence of the miltonia plant of this variety is a multi-flowered, occasionally branching, flowers with a diameter of 4, see.

Petals and sepals are similar, oblong with a spoon-like extension at the end, wavy, red-brown, white or yellowish at the tips. Lip broadly oval, bilobed, with a brilliant red-brown disc in the center, violet-purple, white along the front edge. A column with rounded wings, reddish-purple. It blooms from August to April.

The peak of flowering is in February and March. A plant of moderate or warm temperature regimes of cultivation needs moderate diffused light, high relative air humidity (50 — 90%) and regular airing. It grows well in pots with high drainage and light, aerated substrate.

You can find out more about growing miltonium orchids from this video:

Among the popular varieties of miltonia can be identified Newton Falls with large flowers of rich dark crimson hue with white inclusions on the lip and a pronounced aroma of violets.

Also popular is the variety Ragnielli with thin glittering leaves and erect peduncles extending to the top, which are crowned with white flowers with a light pink lip with a white border, dotted with purple-pink stripes.