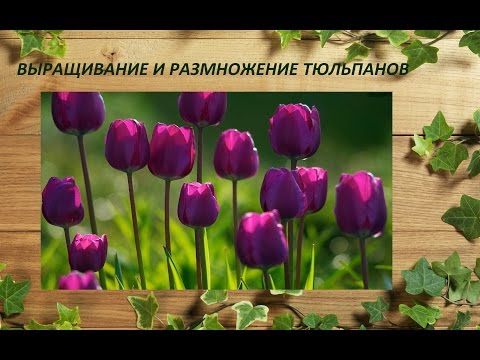 The easiest way to propagate tulips with bulbs: as practice shows, it is this method of obtaining new plants that most growers resort to. But if you want to grow a new, unique variety, then it is advisable to use the seed method. Such a multiplication of tulips more laborious, flowering will have to wait about five years.

These plants to a greater extent than other cultures are subject to mutations, often undesirable.

To avoid the deterioration of decorative properties and their gradual degeneration during the reproduction of tulips, it is necessary to follow the following rules:

Wild species multiply, as a rule, by seeds. Propagation of garden tulips with seeds is used only when breeding new varieties. During seed reproduction, varietal traits are not transmitted to offspring, since tulips are cross-pollinated plants.

Ripened seeds in September-October are planted in boxes with a mesh bottom or directly in open ground. In spring, seedlings appear in the form of a loop on which the seed coat is located, which is observed when sowing seeds of onions, cucumbers and some other crops.

In the first year, the seed gives one tubular leaf and one spine, and stolon grows, which deepens on 5-8 cm and at the end of which a small onion weighing 50-100 mg and in diameter to 4 mm is formed. In the summer, inside the bulb, the bud of the replacement bulb and the bud of the future leaf are laid.

In the fall, several accessory roots grow. In the spring, in the 2 year of the seedling's life, a flat sheet appears, and a larger bulb forms on the stolon. Each subsequent year, the growing season is extended, the leaf of the seedling becomes larger, the replacement bulb is constantly increasing in size and begins to give the baby.

And only on 5-6 the year when seed reproduction appears the first flower, as a rule, it is slightly colored. The final selection of plants with high decorative qualities is carried out over the next 5-6 years, i.e. on 10-12 year after sowing seeds.

These photos show how to propagate tulips with seeds:

Propagation of tulips of different varieties of bulbs and children

Most often, garden tulips are propagated in a vegetative way, planting bulbs and babies. The intensity of vegetative propagation mainly depends on the variety, as well as on the storage conditions of the planting material, agricultural cultivation and the age of the parent bulb.

According to the intensity of vegetative propagation, varieties are divided into 3 types.

For normal reproduction, planting material, depending on the type of vegetative propagation of tulips, is stored at the temperature indicated in the table:

The increased storage temperature for varieties of the 3rd type reduces the yield of large bulbs, but allows you to increase the yield of children and contributes to more rapid reproduction.