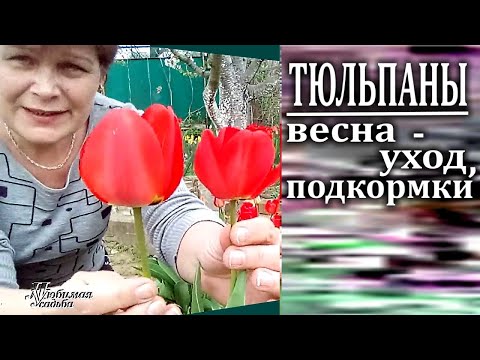 Like all plants, tulips need fertilizing, they are used in early spring, and during budding, and in the fall. Of course, in each of these periods, rates of fertilizer for tulips vary, and the most saturated of them - the very first. It is noted that the best flowering results show those plants that are fed with mineral mixtures consisting of different components.

Since tulip is a fast-growing plant, it needs readily soluble fertilizers. Its roots are able to absorb nutrients only in the immediate vicinity. Therefore, the most effective is fertilizing in dissolved form.

Various authors recommend feeding from 3 to 5 times. Practice shows: with an increase in the number of fertilizing tulips, the result grows slightly, but the complexity of cultivation significantly increases.

The best option should be considered 3-one-time top dressing when growing cut material and 2-one-time when growing small bulbs and children with a shorter growing season, and therefore late dressings have no noticeable effect on the growth and formation of replacement bulbs.

About how to feed the tulips in the spring for lush flowering, you will learn by reading this material.

Making dressings for the care of tulips in early spring

The table gives the norms on how to fertilize tulips in spring: the amount of nitrogen, phosphorus and potassium, expressed in grams of the active substance on 1м2 .:

The first spring dressing of tulips with full mineral fertilizer with microelements is advisable to be carried out in dry form in the snow when sprouts appear. An increased dose of nitrogen is necessary due to the fact that during this growing season there will be increased leaf growth, the formation of which is decisively affected by nitrogen.

The second liquid dressing with full mineral fertilizer is produced during the budding period. Phosphorus and potassium have a favorable effect on the formation of a flowering stem.

The third liquid dressing is produced during the flowering period or immediately after flowering. The vegetation period ends, and the proportion of nitrogen decreases.

What you need to fertilize tulips in the spring

For the normal development of tulips, more than 20 chemical elements are required, mainly obtained from soil. They get to the soil with organic and mineral fertilizers. A number of plant elements are consumed in relatively large quantities. These are hydrogen, oxygen, carbon, nitrogen, phosphorus, potassium, calcium, magnesium.

Other elements, the so-called microelements, tulips consume in small quantities, but their role in the life of plants is great. Trace elements include boron, zinc, molybdenum, manganese, copper and some others.

What is necessary to feed the tulips in the spring and autumn?

The domestic industry produces a large amount of mineral fertilizers. In order to properly apply them and not to damage either the plants or the soil, it is necessary to take into account not only their positive effect, but also the adverse negative effect, which is especially pronounced with prolonged use.

About half of the mineral fertilizers are simple, i.e. containing only one nutrient: nitrogen, phosphorus, potassium.

In this case, the fertilizer may additionally contain other nutrients, such as calcium, magnesium, sulfur, or trace elements, and, according to accepted terminology, is considered simple.

In turn, according to the production method, complex fertilizers are subdivided into complex, complex-mixed and mixed.

Complex fertilizers are produced in a single technological process as a result of chemical interaction of the initial components. Each granule of complex fertilizer contains all the nutrients that make up the fertilizer.

Difficult mixed fertilizers are obtained by mixing one-sided (simple) fertilizers with the introduction of a mixture of various acids, nitrogen and phosphorus-containing products, ammonia and steam, followed by granulation.

The table "What mixed fertilizers to feed the tulips in the spring before flowering":

From simple nitrogen fertilizers, urea (urea) is best used for the main application, since nitrogen in it is in a less accessible form and is absorbed by plants slowly. For fertilizing it is advisable to use ammonium nitrate and ammonium sulfate.

They contain nitrogen in an easily accessible form and are quickly absorbed by tulips over a short period of their growing season.

Of phosphate fertilizers, it is preferable to use double superphosphate, which contains a higher percentage of the active substance and is well absorbed by plants. The disadvantage of a simple superphosphate is the presence of a significant amount of gypsum, which salinizes the soil.

The precipitate also contains a significant amount of impurities, has a long period of validity, it can be applied in the fall during pre-sowing tillage, but it is not suitable for liquid dressings.

From potash fertilizers only potassium (potash) nitrate does not contain impurities. This concentrated fertilizer is good to use on neutral or slightly acid soils.

Potassium chloride should be used in limited quantities, as tulips react negatively to an excess of chlorine in the soil. The disadvantage of potassium sulfate and calimagnese is a high sulfur content, which will gradually accumulate in the soil.

In addition, plants are able to master a balanced amount of macro-fertilizers, which provides a more uniform and efficient absorption. Especially effective for tulips application of complex fertilizers with microelements.

Mineral fertilizers can be used by adding trace elements to them before putting them into the soil.

The amateur florist should be free to navigate in the range of produced mineral dressings for tulip care in the spring and autumn, as well as be able to calculate the application dose.

For example, in the second fertilizing of tulips, it is necessary to deposit 1m2 10 of nitrogen N, 5 of phosphorus (Р205) and 8 of potassium (К20), and ammonium nitrate (18% N and 47% Р205), ammonium nitrate ( 34% N) and potassium sulfate (46% K20). In this case, first, the amount of complex fertilizer applied is determined by the element whose percentage is higher, i.e. on phosphorus.

The systematic application of mineral fertilizers requires constant monitoring of the content of individual elements in the soil, which, as a rule, is not available to the grower, as a result of which there is a danger of deterioration in the composition of the soil.

To avoid negative side effects with prolonged use of mineral fertilizers, it is necessary to know not only about how to feed the tulips, but also:

However, it should be noted that most of the nutrients in the soil are in the form unavailable for plant nutrition. In order to use this vast reservoir, it is necessary to introduce not only trace elements into the mineral fertilizers, but also special catalysts, tailored to the types of soil.

Mastering the production of mineral fertilizers of the new generation will entail: