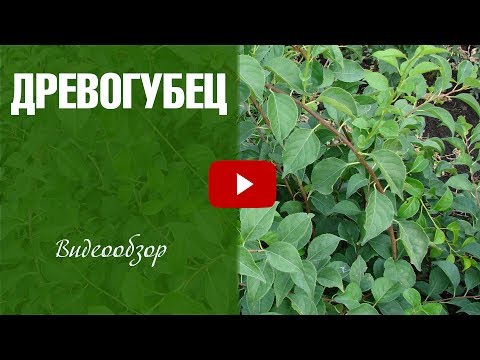 In some botanical reference books, the plant of a tree-pliers from the Berezletov family is designated as a red bubble. From the first name it is clear that this vine "destroys the trees." The second name suggests that the fruits of this culture are red berries bubble form.

There are about 30 species of tree pliers, but only three of them are widespread: round-leaved, rounded and climbing.

The plant community can be both productive and destructive. And an example of this - creepers. In most cases, lianas, especially grassy ones, benefit the support trees, along which they literally spread out, decorating and protecting them from direct sunlight and presenting a productive symbiosis of two organisms.

Not that result is given by tree creepers having strong, “iron” shoots. They tightly wrap the trunk of a tree, not allowing it to grow in breadth, preventing normal water supply.

One of such plants is a wood pliers, photos and descriptions of this vine are presented below.

Tree-keeper - woody vine, the very name of which reveals its nature. However, at a time when pillars, dry trees or other supports serve as a tree plier, he performs his decorative role with success.

Tree-keeper - Liana from the Northern Hemisphere, grows in Europe and America, it is from the family of the Eurasian.

It is known for its exceptional properties as a liana. Such long and strong shoots, tightly wrapped around a support, do not have other plants of this type. The leaves are simple, alternate. The flowers are small, greenish, dioecious, sometimes dioecious.

Look at the photo - the fruit of the tree pliers is a round yellow box with six seeds in orange prissemyanniki:

In order to restrain growth and increase fruiting, shoots are shortened in spring. Obviously, for the originality of the fruits, like lights, the plant was called the “burning star”. However, this name was not widely spread. Much more obvious is the name "tree pliers" when a vine is killing adult, large trees.

The most common plant species are distinguished by unpretentiousness in culture and frost resistance, therefore they are widely used for vertical gardening mainly in the middle lane. The following is a description of the round-leaved, tree-climbing, and round-shaped pliers.

Round pliers - Liana to 12 m length, originally from China, Japan, from the Far East.

It got its name for round leaves of medium size (5-10 cm in diameter) with long (up to 3 cm) dark green petioles. In autumn, the leaves turn red.

The flowers are small, collected in small brushes greenish-yellow color. They have a pleasant, delicate flavor. Appear in June. The fruits are very decorative. This is a bright yellow box in which orange seeds are visible when cracked.

As can be seen in the photo, round-cut tree pliers are distinguished by abundant foliage:

Differs unpretentiousness in culture. It can grow in partial shade and even in the shade. Very winter-hardy, even in severe frosts and frosting at the tips of the branches. However, in the spring due to the emergence of new shoots is a quick recovery.

The soil is generally not demanding, but on wet humus gives lush foliage. The root is deep, developing and the mass of surface roots, such as rhizomes.

Easily propagated by root shoots, root shoots and seeds. Seeds are sown in the fall, immediately after harvest. But it is possible to do sowing in spring. Then you need a three to four month stratification.

Climbing tree - this species is from North America.

It has ovate serrate leaves with a wide wedge-shaped base. They are light green, shiny. Shoots reach 5-7 m length, rounded, without thorns.

Pay attention to the photo - in the creeper of this species, the flowers of the species are small, yellow, gathered in panicles up to 7-10, see length:

Bloom in June. Ornamental fruits are formed less than in other species. To obtain them you need to plant two plants next to it.

It is a powerful liana, reaching 9 m and more in length, with short spikes on the stems and a thick foliage that forms a continuous cover. In the fall, numerous fruit-boxes burst, revealing the yellow inside of the wings and very decorative scarlet prisemyanniki.

Compared with the previous species, it is less winter-hardy if the frosts alternate with thaws.

The tree plow as a species belongs to the supported vines. They, unlike other groups of vines, do not have special attachment organs - adventitious roots and antennae. Their shoots penetrate through the branches of other plants and, relying on them, are held by thorns, pubescence, prickles, hooks (depending on the species).

The powerful stems of the tree pliers can rise to the tops of the trees to a height of 5-6. By releasing more and more new leaves, the vine is firmly fixed in the crown of the tree and can be moved to other trees.

In the absence of a support, the liana falls to the ground, forming impassable thickets in a short time. Therefore, frivolous breeding of a tree pliers, for example, in a garden, a forest park, is fraught with the danger of littering the territory.

All types of tree pliers are well propagated by vegetatively - shoots, root suckers, layering. But the highest quality material gives a seed way of reproduction.

Seed ripening occurs in August-October (depending on the species). It is necessary to collect the seeds during the period when the box cracks, but the seeds do not fall out of it yet. The best crops - in the fall, freshly harvested seeds.

They are not dried and not soaked, but they must be put in wet ground. If it was not possible to sow the seeds immediately after harvest, they should be mixed with wet sand, arranging a kind of stratification. Then it is possible to plant the seed of the wood needle in late autumn.

When growing vines in one place, shoots remain 1-2 of the year. Then, when caring for the tree pliers, the plants are low pruned to cause the emergence of powerful shoots, and transplanted to another location, giving a large area of ​​nutrition.

Here they sit still 2 of the year. Each year, make trimming pruning, that is, remove weak and excess shoots, some of them are pruned to enhance branching. Fully prepared planting material of the pliers can be used for planting and care in a permanent place on the 3-th year.

Facebook
Twitter
In contact with
Google+
SIMILAR ARTICLES:
Actinidia kolomikta in Moscow region - beauty and benefits
Mina flower: how it looks and how to grow
Highlander Balju and Tuberous
Garden vines: photos and names of plants