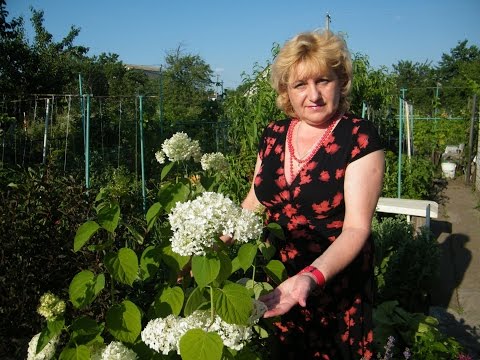 When choosing beautiful flowering plants for the garden varieties of hydrangea trees are preferred most often. They are cold-resistant enough to withstand the conditions of the average Russian climate, do not require the use of complex agrotechnical methods for growing and will certainly delight caring owners with lush and long flowering for a dozen years.

This is perhaps the most common hydrangea in the gardens of central Russia. Beautiful, of course, but too familiar. But with plants it happens like this: for the time being.

The best varieties of tree hydrangea do not require much attention: they do not freeze, they bloom every year. In the spring, you need to cut out old shoots, tie up a bush - that’s all, in general. Then you can almost forget about tree hydrangeas (N. arborescens) and with certainty wait for the inevitable reward - lush bloom.

Oddly enough, but gardeners still care about the question: when to trim a tree hydrangea?

In the spring, she begins to sap flow, and the hydrangea "cries", which causes panic among the owners. It is better to cut twice. The first is in the autumn, at this time only the inflorescences are cut (the English call it beheading) so that the snow that fell out will not break the branches. Especially prone to this is 'Annabelle'. The second time pruned in the spring, before the sap flow, when the kidneys are not particularly swollen. Or during the appearance of young leaves, then the hydrangea already ceases desperately to "cry."

Then you can see the photos, names and descriptions of tree varieties. most hydrangeas popular with gardeners.

One of the best varieties of tree hydrangeas for the Moscow region is 'Annabelle'!

But how will he spend the winter? Suddenly, shelter still need? And is it true that the inflorescences without any tricks from the florist will be as huge as in the catalog? After more than a dozen years, one can say with confidence: the variety is wonderful!

It seems that quite recently everyone was chasing 'Hayes Starburst' - the first terry winter-hardy variety of hydrangeas, and then, having received the coveted plant and having watched the first flowering, many were disappointed.

Apparently, dreamed of something like terry 'Annabelle', and here the inflorescences cannot boast with a gigantic size, the twigs are thin, they require support, the bush grows for a long time, and the height is not more than a meter. Those who want a plant more luxuriously, and most importantly - immediately, this variety is unlikely to appeal to. The plant is exquisite, it can not be planted in the far corner of the garden, flowers can only be viewed closely. And the number of branches - will come with time, and with age they will certainly become more powerful.

Another hit that appeared a few years ago is the brand 'Incrediball'. According to the description, this variety of tree hydrangea is similar to 'Annabelle', but is its improved version: the flowers of 'Incrediball' are four times larger, and the diameter of the inflorescence is up to 30 cm! The main "trick" is that the inflorescence resembles a ball. However, some growers complain that they have not yet seen the promised "ball". We must, again, just wait. Young hydrangeas may not immediately show their varietal characteristics (although re-grading, alas, cannot be ruled out).

The variety of tree hydrangea 'Invicibelle' is suitable for the Moscow region, it is really winter-hardy and in spring a very vigorous seedling is found! It is senseless to discuss the hue and structure of the inflorescence: some people like them, some don't.

As can be seen in the photo, in the variety of tree hydrangea in 'Invicibelle', the inflorescence is transparent, airy, the hue is rather complicated - muffled, dark pink:

This is unusual for Russian gardens. But 'Invicibelle' is interesting precisely because of its dissimilarity to other forms.

Of course, the fact that the stems of her lie down, and the inflorescences sometimes incline their heads, is not encouraging. But, first, these plants are very young in our country - it takes five years or more for them to manifest themselves in all their glory. Secondly, this hydrangea needs delicate supports and not less delicate neighbors.

The variegated tree hydrangea, even if it appears, is unlikely to winter in our climate without shelter. Another thing - with purple or yellow leaves. On these plants, breeders would be worth thinking about!

She had inflorescences almost like a variety. 'Grandiflora'only smaller. This miracle lived for about four years and then froze into a single snowless winter. It was necessary to take a more serious attitude to the plant - at least the tree trunk should be mulched in the autumn.

What was the name of the cultivar? Experts choir argued that such a plant does not exist and can not be.

See photos of tree hydrangeas, the names of which are given above:

Explicit luck breeders - a new variety of tree hydrangea 'White Dome' (sometimes it is sold under the name 'Dardom'). In Russia, this hydrangea has not yet found many fans. It seems that just because it is not easy to find it. Her inflorescences are large, flat, bearing sterile flowers only along the edge. They are so tender - they resemble Venetian lace or a pack of a ballerina. The plant itself is powerful, the branches do not lie down.

Another curious variety - 'Hillsof Snow'. Its peculiarity is super-abundant bloom and flowers slightly turning pink by autumn, which, in general, do not occur in tree hydrangeas.

At the novelty 'Bella Anna' firmer shoots and a more intense dark pink shade at the peak of flowering than in Invincibelle. The history of the variety “Bella Anna” is quite complicated: before its appearance, there were several cultivars with pink, but small inflorescences, on the basis of one of them this novelty was created.

Pay attention to the photo - the type of tree hydrangea 'Bella Anna' is a low shrub (1-1,3 meter), with thin branches, bending down under the weight of huge inflorescences of crimson or rich pink shade:

The inflorescences are slightly pointed, which gives them an unusual look for tree hydrangeas. It blooms from mid-summer to frost. Winter hardiness is high, does not tolerate stagnant moisture. It is considered one of the most spectacular and beautiful varieties of hydrangeas.

Another representative of tree hydrangeas, 'Pink Pincushion' grade (in translation - "pink cushion for pins") - a bush a little over a meter tall with flat pink buds. The blooming of this variety of hydrangeas falls in the middle - the end of summer. In terms of soil, acidity and moisture, the plant is quite unpretentious. 'Pink Pincushion' is not enough frost-resistant variety, requires shelter.

Differs from other tree hydrangeas like the variety 'Butonik' from classical varieties of phlox. Shrub is clearly designed for fans of the exotic.

In the photo you can see the varieties of tree hydrangeas, which are described on this page:

on Facebook
Twitter
In contact with
Google+
SIMILAR ARTICLES:
Rare types of hydrangeas
Planting and care for garden hydrangea in the open field
Thorny hydrangea: description and features of care
Diseases and pests of garden hydrangea