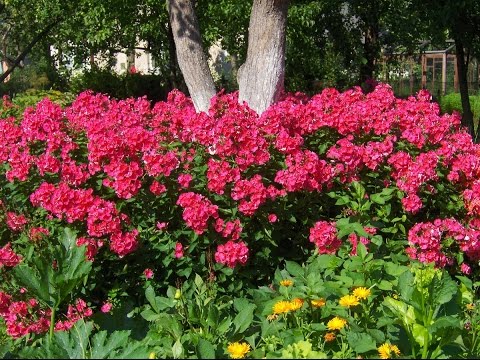 The process of phlox multiplication involves several stages. It is important to choose the right method that will be optimally suited for each individual case. The most common breeding perennial phlox carried out vegetatively: cutting and dividing the bush. Annual species can be propagated by sowing seeds for seedlings. Carrying out phlox care, reproduction can be carried out as if in passing: bending a sprig to the ground, spuding some above-ground part of the bush, etc. the most difficult is the process of cutting culture. It includes the correct pruning, for which you need to choose the right time, rooting and seating. Read in this material all the necessary information about cutting and dividing the bush and try these methods in practice.

At the end of the article, the video shows the reproduction of phloxes on the household plot using various methods and techniques.

How to seed phloxes in spring

Before you spread phlox in the spring, you need to choose a method of reproduction: dividing the bush or grafting.

The easiest way to vegetative propagation of phlox - dividing the bush

However, sometimes with the help of division it is impossible to multiply good varieties quickly and in the right quantity. For this purpose, other methods of vegetative propagation of perennial phlox are used.

The most common of them in amateur floriculture: spring cutting growth shoots with part of the rhizome (“heel”) and summer green cutting cuttings of vegetative shoots. Both breeding methods allow you to save varietal signs of phlox.

Before you properly plant phlox, you need to know that when propagating by cuttings, you get excellent planting material with a fully rejuvenated root system. However, it is important to remember that if reproduction is carried out with the aim of preserving the variety, cuttings should be taken only from healthy, typical of the breeding bushes. A full, characteristic flowering of spray phlox, as a rule, is celebrated in the third year.

The division of phlox bushes is the easiest and most affordable for any amateur grower to grow a perennial flower. It has been successfully used for centuries. Reproduction of phlox by dividing in the spring allows preserving all the properties of the parent specimen.

Spring division phlox try to carry out as early as possible, without waiting for the outgrowth of the shoots (April - early May). At this time, you can get the maximum number of landing units. Small delenki planted in the spring will delight with lush inflorescences by the fall.

In the autumn division of phlox, the parts should be larger, consisting of at least two to three faded shoots, with at least five newly formed buds of renewal (vegetative eyes). The plant intended for division is dug by the end of flowering (at the end of August - beginning of September), when the buds are clearly visible. Do not forget that in the fall to delay the planting phlox can not be. Late autumn planting often leads to losses. The division of the bush is best done in cloudy weather. It is necessary to dig a plant carefully, trying not to damage the organs of regeneration (buds or growing shoots).

The younger the bush, the better the planting material will be. In addition, the old lignified rhizomes are difficult to divide, and a large number of buds and shoots are damaged and easily broken.

On the dug out rhizome there is a lot of soil, which is gently shaken off or washed off, dipping into a bucket (a directed stream of water can be used). After this, parts of the bush are usually separated by themselves or are susceptible to division when gently pressed. Older or very large rhizomes are more convenient to first be divided into two - three parts, then finally divided into smaller ones. It is recommended to sprinkle the slices with crushed coal.

If the division of the bush is carried out at the end of summer, the vegetative shoots are shortened so that some green leaves remain on them, and they must be watered. Immediately cut the shoots should not be completely, as this will cause the germination of the organs of renewal, which can badly affect the plant as a whole, that is, its preparation for winter and flowering next season.

Usually, in old bushes, part of the rhizome is lignified; it is carefully separated and thrown away. Delenki carefully inspect, remove damaged roots and all dead diseased tissue. When forming a delenka, very long roots are slightly shortened.

The sooner a divided phlox is planted, the faster it takes root. Planted phlox necessarily well watered. If planting material is not supposed to be planted immediately, it can be stored for a while in a cool place, wrapping the roots with slightly moist sphagnum and placing it in a plastic bag.

In the spring after dividing the bush very often there are broken growth shoots. They can be landed on a separate bed, slightly priteniv for some time. They take root easily and, as a rule, bloom by the end of summer.

How to propagate by cuttings phlox (with video)

When phlox multiplies by growth cuttings, there is practically no lunge. With regular watering rooting is up to 100%. Propagation by cuttings carried out in May. From one three-year-old uterine plant for breeding, you can take no more than 50 - 60% of available shoots.

Before propagating phlox by cuttings, if necessary, dig the soil around the mother bush a little.

Shoots about 5,5 - 7 in height (up to 10) cm are gently broken out at the very base of the bush with a part of the rhizome (“with the heel”) and immediately planted in light, loose, nutritious soil in partial shade, on a previously prepared bed. Planting depth of cuttings 2 -3,5 cm. Recommended distance between rows 10 - 12 cm, between cuttings - 5 - 7 see. Watering is carried out before planting and after. Lightly pritenuyut.

For rooting cuttings, it is important not to allow the soil to dry out. In dry, hot weather, they should be watered three to four times a day. Rooting cuttings occurs in about a month.

As soon as the shoot starts growing, shading is removed, the plants are fed twice with full mineral fertilizer (10 g per 1 liter of water) with an interval of 10 - 14 days. During the growing season, the soil is regularly loosened between the rows. By the end of the third month (from the beginning of rooting), phloxes develop a good root system; four months after the beginning of grafting, young plants bloom.

See how to propagate phlox by cuttings on a video showing all aspects of this process:

Reproduction of phlox cuttings in the summer (with video)

Reproduction of phlox cuttings in the summer - the most common method of breeding spray flowers. This technique makes it possible to obtain a large amount of high-quality planting material with a small number of uterine bushes.

In the summer (from the end of May to the beginning of July), the vegetative shoots are cut and divided into parts with two (or more) nodes. When reproducing phlox, cuttings use only clean sharp cutting tools. If the instrument is blunt, many cells are damaged, which soon die, contributing to the formation of rot.

The bottom cut is usually made oblique, below the node by about 2 -3 cm; top - straight. To reduce evaporation, the lower leaves are cut off completely, and the upper ones are shortened by half. Young non-mature tops and lower woody parts of the shoot are removed (woody shoots root poorly).

The prepared cuttings are planted in special boxes or on a previously prepared ridge (cuttings) with loose, fertile soil. Well, if the surface of the soil is covered with a layer of washed sand - 1-2 cm, it will reduce the evaporation of moisture. Places for ridges with cuttings choose shady and not subject to the withering effect of the wind. The cuttings are planted at a depth of 2 - 3 cm at a distance of 3-5, see. Sand at the base is pressed tightly with a finger or a peg. For good rooting of the cuttings, it is necessary to maintain the soil in a uniformly moist (not wet) condition. In dry hot weather it is necessary to water up to three times a day.

See the reproduction of phlox cuttings on the video, which shows all the subtleties of this agrotechnical operation:

Cutting phlox spring more This is advisable, since after about 20 - 25 days, callus forms in the cuttings, and in a month - and the roots. Rooting is up to 80%. Very often, by the autumn, young plants obtained during early grafting, bloom, and when late - bloom the following year, forming at the same time 1 - 3 flowering shoots along the 1. When transplanting rooted cuttings to a permanent place, it is useful to deepen the root part on 1,5 - XNUMX cm to form additional young roots.

The same method of cutting phlox can be rooted and flowers from bouquets, even after they stand in a vase (but not more than three days).

on Facebook
Twitter
In contact with
Google+
SIMILAR ARTICLES:
Phlox pests and control of them (with photo)
Phloxes filings (feelings) and their varieties
Variegated phlox: description, varieties and care for it
Diseases of phlox perennial and struggle with them (with photo)