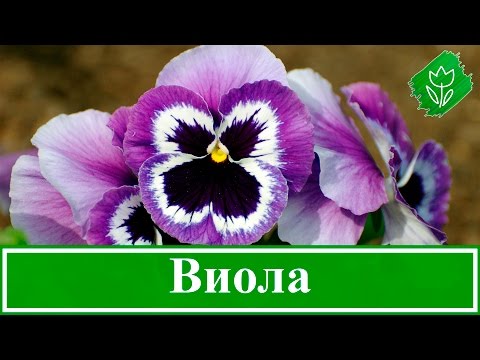 Violet Wittrock (V. x ivittrockiana) in botanical reference books it has the names Viola Vittrok or Pansies. This species of plants of the family Fialkovye received its name in honor of the Director of the Botanical Garden, the Swedish professor Veit Vettrok.

It was this botanist who devoted several scientific papers to the classification of viols, gave a morphological description of the plant, and traced the history of its origin.

In culture, the flower Viola Wittrock is widespread.

Leaves alternate, petiolate, with crenate margins, ovate or oval, bottom and narrow at the top of the shoot. The flowers are large, with a diameter from 4 to 12 cm, solitary, formed in the leaf axils.

The corolla is 5-lepestine, of all sorts of colors, from pure white to charcoal black, monochromatic or with strokes and stains of various colors and sizes.

As can be seen in the photo, the petals of the Vittrock violet can be smooth, corrugated or with wavy edges:

Flowering begins in late April and continues throughout the warm season.

Prefers nutritious, moist and loose soil, sunny or semi-shady places. It can be cultivated in one-year, two-year or perennial culture. Exceptionally widely used in landscaping around the world as a garden, flowerbed, container, pot plant

This page contains a description of the Viola Wittrock varieties from different garden groups.

Over the past 150-200 years, plant breeders and flower enthusiasts have created a very large number of Vittrock violet varieties, differing in size, flower color, flowering time, flowering time, resistance to various environmental factors, methods of application in gardening and many other features.

In the second half of the 20th century, heterotic hybrids replaced the varieties. Wittrock F1. Over the past three to four decades, many series or varieties have been created, including dozens of F1 hybrids.

Most of these hybrids are characterized by early, abundant and long flowering: while the old litter loses its decorative effect in mid-July - early August (the flowers become small, flowering is not abundant, and the bushes are non-compact), F1 hybrids have a beautiful view until late autumn.

Compared with varieties, hybrids are more viable, grow faster, start to bloom earlier, less affected by diseases. Practically for each hybrid variety or group, its own technology has been developed, which allows calculating the time of the beginning of flowering with an accuracy of up to a day.

Such hybrids look great in a flowerbed, have almost perfect evenness in size and color of flowers and plants. It is these hybrids that now form the basis of the industrial assortment of viols, while the varieties remained mainly in the amateur floriculture.

In the literature on floriculture, you can find various taxonomy of varieties and groups of viols, the most famous of them - grouping by the size of the flowers.

The varieties and hybrids with a diameter of flowers 4,5 — 6 refer to small-color viols.

Viola Vittrock 'Flamenco F1', 'Rococo' and other varieties of the Hiemalis group

Garden group Hemalis-winter (Heiemalis) with a diameter of flowers 4,5-5,5 cm was registered in the year 1916.

The varieties included in it are winter-hardy, early and long flowering and compact bush:

The variety has an exotic, unusual look, but, unfortunately, in the conditions of Russia, the corrugation of petals is rarely seen.

It can be cultivated in flowerbeds, in containers and pots throughout the summer.

'Tiger's Eye' ('Tigereye') - a variety with an amazing color - brownish-yellow, with small dark spots in the center and shading on all petals

Medium-flowered viols are groups with flower sizes from 6 to 7,5.

The oldest of medium flowering groups is Trimardo (Trimardeau) - was launched in France in the 1880-ies. The plants of this garden group are characterized by fast and strong growth, good foliage, rather large size and beautiful flower shape, as well as abundant flowering.

Due to such remarkable qualities, some varieties of this group are still alive today, and not only exist in the collections of amateurs, but also are widely used in gardening.

'Lord Beaconsfield' ('Lord beaconsfield') - one of the best in the group, has blue-purple lower petals and a white sail

Nowadays, an improved version of this variety with a larger flower has been created:

'Alpensee' and other varieties of Viol Vittrock group 'Swiss giant'

These are low compact plants with high winter hardiness and abundant early flowering. The varieties of this group have quickly gained popularity in many countries and are widely cultivated nowadays.

The most famous of them are:

'Abendglut' ('Abendglut') - with dark red flowers and a dark spot

Many of these varieties can still be found in stores selling seeds of flowers.

Created at the end of the 20th century Ultima F1 (Ultima Series F2) has blooming compact plants with flowers with a diameter of about 6, see. Consists of 26 varieties of different colors.

Maxim series F1 (Maxim Series F1) - plants of early and long term flowering, resistant to heat and cold. Flowers with a diameter of 6 cm different colors with a dark "eye" in the center. Includes 12 varieties.

Joker F2 Series (Joker F2) has a very interesting, double and even triple color petals. The diameter of the flower is from 6 to 7,5. See the 7 series of varieties.

Jaint Foreranner (Giant forerunner) - One of the most winter-hardy series, consisting of 15 varieties with different colors of flowers.

Among the varieties of the series 'F1 Spring Time Cassis' (F1 Springtime Cassis') - with velvety, dark purple flowers, all petals of which are edged with a thin white border.

'Padparaja F2' ('Padparadja F2') - one of the most beautiful varieties with flowers bright orange color and very long flowering.

For large-flowered viols, the diameter of the flowers is from 7,5 to 8,5.

These photos show the different varieties of Vittroch Viols:

Early flowering begins simultaneously with the Schweizer-Riesen group, but the winter hardiness is unfortunately low.

Серия Regal F1 (Regal series f,) differs from the Crown F1 series (Crown F1 only in the presence of dark “eyes” on the petals. The series consists of 7 varieties and variety mixtures.

Fancy F1 Series (Fancy serie fxnumx) consists of 11 varieties of different colors, both monophonic and with a dark eye on the lower petals.

Fama F1 Series (Fama Serie F1) created specifically for pot and container culture and consists of 17 varieties with different colors of the flower, both plain and variegated.

Giant viols have flowers with a diameter of 8,5-10, see

In supergiant viols, the diameter of the flowers is more than 10, see

Plants are resistant to adverse weather conditions, including heat. The group includes 8 varieties of Viol Vittrok with white, pale lilac, dark purple and other petal colors. Almost all varieties have a dark spot in the center of the flower.

See what the Vittroch viola grades look like in these photos:

on Facebook
Twitter
In contact with
Google+
SIMILAR ARTICLES:
Mina flower: how it looks and how to grow
Planting anemone seeds in the open field and subsequent care
Medicinal kupena: application in medicine and design
Ground Cover Phlox - Phlox douglasii (Douglas Phlox)