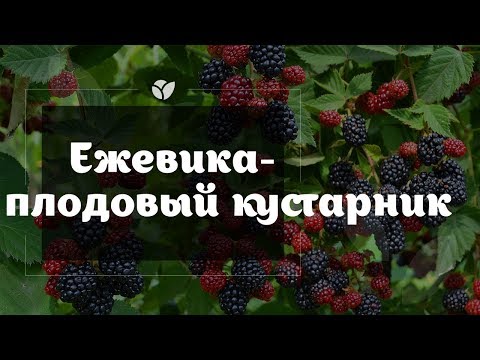 Peculiarities of growing blackberries in summer cottages depend on the cultivated plant variety. There are two forms - with creeping and erect stems. As a rule, it is easier to grow a second type in the country.

So that the branches are not tangled, they need to be tied to a trellis or other support. Particular attention in the care of blackberries during the cultivation should be paid to pruning - the correct yield will depend on the accuracy of this agricultural practice.

Blackberry (Rosaceae family) is a shrub up to 3,5 m height. More than 200 species of blackberry grows in Eurasia and America, of which up to 50-ty is found in Central Asia, Ukraine, Russia, in the Caucasus.

The biological features of the plant and how to properly grow blackberries in the garden are described in detail in this article.

The first thing to note when describing the characteristics of blackberry is that its blackberry shoots can be erect, arcuate or creeping, covered with spikes. They are green with a reddish, purple or brown tint.

The leaves are complex, palmate or trifoliate. Flowers bisexual, white, in racemes, cross-pollinated. There are repair forms.

Blackberries are very productive crop, it is called "scree" because of the large number of berries. Each berry is a complex drupe, consisting of fairly large kostyanochek.

Rip off the berries when the dimple in the center of each fruit flattens out. Ripe berry acquires a bluish bloom, the taste is sour-sweet, aromatic.

The blackberry root system is represented by a rhizome like a raspberry.

By the nature of the growth, blackberry bushes are divided into two large groups: sundews, which have a creeping stem, and blackberry itself, with upright stems. But there are also intermediate forms, half-creeping. Erect stems with time form an arcuate bend, which is very characteristic of blackberries.

Creeping sundews are more difficult to penetrate both in personal gardens and in production because of the difficulty of care, although the sundew fruits are larger, juicier and tastier than the fruits of other blackberries.

Blackberry has great value as an ornamental plant. A classic example is the blackberry on a bamboo or reed trellis during the ripening of berries.

The main ancestor of all varieties is grayberry blackberry. It is distributed in the wild in the European part of Russia, Iran, Central Asia, Western Siberia, in the Caucasus. Thickets are impassable for animals and humans due to the large number of thorns.

According to the biological characteristics of the blackberry is unpretentious. In its wild form, it grows on damp edges and clearings, on cheerful sunny meadows and along the banks of rivers and streams, in thickets of shrubs and on gentle slopes.

Wild blackberry has a high frost resistance, which is not the case with some of its varieties. At the same time, the Michurin varieties are very hardy.

There are many varieties of blackberry, the most famous of them are:

Basically, they are all hybrids from crossing blackberries with raspberries. They are superior to the one and the other, yield, refinement of taste, but often inferior in resistance to the environment and the content of nutrients.

The exceptional value of blackberries as a high-yielding, sustainable and useful culture constantly inspires breeders to create hybrid varieties:

As well as without therapeutic Thornless

These photos show the blackberry varieties described above:

How to grow blackberry bushes in the country

Despite the fact that these shrubs like wet soil, it is very drought-resistant. Positively responds to fertilizers, but does not suffer in their absence, having a supply of nutrients in the rhizome.

For proper cultivation of blackberries in the country you need to prepare a plot with warm, soft, neutral soils. Suitable cultivated and nutritious medium loam.

Depending on the variety (upright or climbing), the blackberry is grown in groups or on trellis. For trellis use, the distance 2,5 m between plants and 1,75 m is between the rows. When erect bushes distance when planting 3 m from each other.

Tapestries suit the height of the 1,5 m in the 3-4 series. Tapestry culture has great advantages: the berries are larger and do not rot, as well as better in quality. Tie to the trellis biennial shoots in the spring. Flowering on the trellis is delayed on the day's 2-3.

When growing blackberries, particular attention should be given to pruning. Pruning shrubs should be annually. Since it gives a lot of basal shoots, they need to be rationed.

On the bush, no more than five are left, and sometimes three - in creeping forms and 5-8 in stem, erect. Cut out all the weak, broken, undigested shoots, and the remaining shortened to 1 / 3.

However, if the shoot has a lot of flower buds, it is shortened less. According to the rules of pruning, seedlings of two years of age are cut out. This procedure is usually done in the fall, and shortening of the shoots - in early spring.

For the winter, upright shoots are tied together so that the wind does not break them, and in spring they are tied up to a trellis.

When shortening the shoots in the spring, one must keep in mind that the lower they are cut, the later will be flowering and, accordingly, fruiting. The berries are large, but their number is much smaller.

Shoots at summer nip thicken and the number of fruit formations increases. Spring shortening of the shoots is especially shown weakly branching varieties.

Watch the video of how pruning is done while caring for blackberry while growing on the summer cottage:

Preparation of soil for blackberries should be done in advance, from autumn to a depth of up to 25 cm, that is, on a bayonet spade. In the future, the soil around the blackberry is treated with care, as it is possible to damage closely spaced rhizomes.

To loosen the soil should be in the summer, after heavy rains, to a depth of 5, see. Summer loosening in time coincides with the phase of the formation of fruit buds. Therefore, the harvest of berries often depends on systematic loosening (after rain or watering).

Since this is a significant agricultural application, it is even recommended that specific time periods for loosening associated with the phases of plant development.

When caring for blackberries when grown in the country, bushes must be fed. The most effective action of fertilizers is shown as the main one when filling the soil before planting.

It should be organic-mineral. 2-3 kg of humus and 60 g of superphosphate are introduced under one plant. After planting with dressing the soil with fertilizers, the next 3-4 of the year should be fertilized with nitrogen only in the spring. When there are no fertilizers when planting, feeding is recommended. They must be mineral with a predominance of phosphorus.

In this video, additional tips are given on growing blackberries in the garden:

on Facebook
Twitter
In contact with
Google+
SIMILAR ARTICLES:
Red currant: description, breeding and best varieties
Honeysuckle: a description of varieties and secrets of cultivation
Fitolacca American and lacquinosa - exotic in the garden
Diseases and pests of raspberry: a description and effective fight