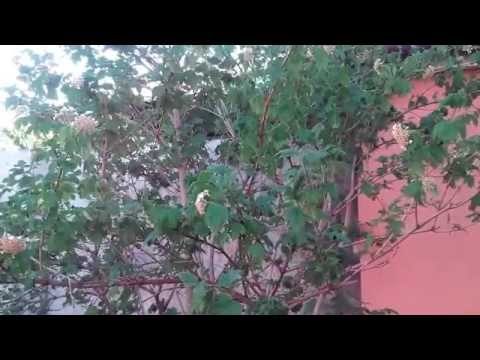 Like all other shrubs, Kalina (Viburnum) damaged by diseases and pests, especially high risk of the spread of insects and infections in adverse weather conditions.

Of the diseases, this culture is most often susceptible to drying of the branches and infection with gray rot. The most dangerous pests are leaf-aphids and viburnum leaf beetles.

Under the influence of low temperatures, the bark of the branches darkens, dries up, cracks. Naked wood gradually dies off, the blooming leaves are pale in color and quickly dry out. Bark necrosis (tubercular and cytosporosis) often joins this disease of viburnum, and shrubs die.

Control measures. An effective way to combat this disease is cutting out dried branches. If frostbite is weak, disinfect the cracks with copper sulfate solution (1%) and coat with clay or oil paint. Shrubs before leafing sprinkle Bordeaux mixture or its substitutes.

The causative agent is a mushroom Botrytis cinerea. With an abundance of precipitation the leaves are covered with brown vague spots without edging. Spots quickly increase, merge, leaves turn brown and rot.

As shown in the photo, with this disease, viburnum necrotic tissue dries, cracks and falls:

Often there is a smoky gray sporulation. With the mass distribution of this disease of red viburnum berries and young shoots are affected. Infection persists in plant debris and in the cortex of affected shoots.

Black viburnum aphid leaflet (Aphis viburni) -Small sucking insect dark brown, black. Lays eggs on the bark of the branches near the buds, where they hibernate. When leafing eggs, larvae of the first generation come out. This insect pest of Viburnum feeds on the sap of young leaves, with a large number of pests the leaves twist and dry.

Control measures. Spray viburnum bushes against aphids by one of the drugs: fufanon, Inta-Vir, fitoverm.

Kalinous leaf beetle (Galerucella viburni) - light brown beetle. The larvae are greenish-yellow, with a black head and black spots on the back. In May, they feed on young leaves, roughly eating them. In early June, the larvae pupate in the soil.

Through the 3-4 weeks, bugs appear that devour the leaves, shoots and berries. In August, females gnaw holes in the young shoots and lay eggs in them, covering them with lids.

Control measures. Trim dried shoots with egg-laying. To control these pests, viburnum should be sprayed with bushes in May, when the larvae hatch, or in early August, when bugs appear, with preparations: Fufanon, Iskra, Inta-Vir, Aktellik and Kemifos.

Facebook
Twitter
In contact with
Google+
SIMILAR ARTICLES:
Red currant: description, breeding and best varieties
Diseases and pests of pear: description and measures for the protection of trees
Honeysuckle: a description of varieties and secrets of cultivation
Pests and diseases of Chubushnik