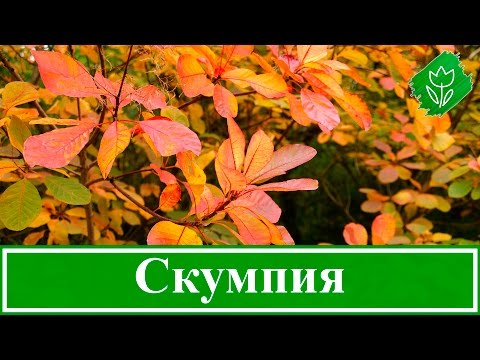 In culture is common tanning leather (Cotinus coggygria). It is a large shrub up to 5 m tall, sometimes a small tree with a dense rounded crown. The original look gives the plant loose inflorescences of inconspicuous flowers that change during fruiting, covering the bushes with a fluffy air cloud. In the autumn, skumpiya is also very beautiful, because the leaves acquire a pleasant red and yellow color.

There are varieties of skumpii with beautifully colored leaves. Unfortunately, the varieties are less winter hardy than the main species. Relatively stable and very beautiful form of 'Purpureus' with purple foliage.

Shrub light-requiring, drought-resistant, prefers calcareous soils. It grows poorly on heavy wet soils. Severe frosts can damage young growths, but even with strong frosting they are easily restored. It tolerates pruning. But if you want to see blooming skumpiyu, cut the plant is not necessary. Propagated by seeds, varieties - cuttings and layering.

The plant copes well with the role of tapeworm. Purple-leaved forms are very beautiful in group plantings.

Sumpium is an ornamental plant, distinguished by its singularity among many other shrubs. When the period of flowering begins, namely from July to October, the plant is covered with many inflorescences resembling strings from afar. It looks like a real clown wig is wearing a bush.

Foliage plants also has a decorative function. It shimmers with a variety of colors throughout the year: from dark green to bright red shades. In the fall, the greens of the shrub become completely colored, acquiring a delicate purple color with modulations. If you pick a leaf of this plant and rub it slightly in your hand, then it will smell like carrots.

In the summer, the plant is covered with yellowish-white buds and the bush seems to sink in a milky cloud. After these metamorphoses pass, the flowers fall off, and from their bases thin purple threads grow, which create the effect of hair. It is thanks to them that the shrub got the name “wig tree”.

Planting and care for outdoor skumpii

An ideal place for planting this plant will be a well-lit plot of land. When planting leather skumpi important to consider that it does not tolerate excessive moisture in the soil. Do not plant it near groundwater. She will easily endure drought.

The plant is not whimsical to the soil, but feels best on the "air" soils. Before planting, the soil should be dug in with the introduction of lime to lower its pH. Although shrubs can grow in weak acid soil.

When planting and caring for skumpia, it is important to bear in mind that it can grow to 5 meters in all directions. However, there are more "modest" varieties, giving about 10-15 cm per year.

Planting a bush is made from early spring and before the onset of the first frost. Depending on the size of the root system, you need to dig a hole of suitable size. After planting, the plant is covered with fertile soil and compost. There is no clear definition of how much is needed of both. But in all it is necessary to observe the measure, especially since the bush grows quietly even on the most infertile soils.

Sugar in the suburbs regularly freezes. To protect the bush from extreme cold, it should be mulched and covered with agrofibre. If the winter system overrides the root, the plant will quickly come into shape. You can grind, for example, with peat or fallen needles.

Planting and caring for skumpiya in the Moscow region require special attention, since this region is characterized by severe cold. After the first thaw, shrubs should be fertilized with a complex mineral fertilizer to help it recover faster after frosts. In early summer, the plant can be fed with organic matter, but starting from the middle of the season it is not necessary to fertilize. It is necessary to feed him only if the winter has stood out harsh, and the plant needs help.

Look at the photo of planting and care for leather skumpiya:

Planting and care for the tanning industry do not require special skills and extensive experience in gardening. If the shrub is planted relatively recently, and the climate in your area is rather dry, then it is worthwhile to ensure regular watering for it - once a week. If we talk about older skumpy, they can easily endure the dry season. If you are not able to provide weekly watering, then the soil around the plant should be mulched to avoid premature loss of moisture.

Care for leather skumpyu provides primarily for the protection of shrubs from disease-causing fungi. If you notice that the leaves began to wither, and the shoots die off, then the affected parts of the plant should be cut off immediately.

When caring for skuma in open ground after planting it must be regularly cut. This activates faster growth of the branches and an increase in the leaves of the shrub itself. But it is important to know the measure: if the plant is strongly cut, it can adversely affect the subsequent flowering.

Pruning is carried out and in order to form a small, neat bush. The procedure is carried out after the thaw, until the first greenery on the plant. Shrub branches must be cut in half. If the bush has completely lost its appearance, then it is completely cut off, leaving 10 cm off the ground.

Look at the result of careful care for skumpiya on the photo:

Look at proper planting and care, leather skumpia will blossom as in the photo:

It is possible to propagate the shrub in different ways, one of them is layering. Lower the lower branch of the plant to the ground and secure with studs. To grow roots faster, the bark should be trimmed slightly. As soon as the plant is mastered on a new piece of land, the branch is cut from the main shrub. The main thing is to be careful.

Also possible and the root method of reproduction. To do this, use the green cuttings. After preparation, they are soaked for 12 hours in a heteroauxin solution.

After a while, the cuttings can be planted in a greenhouse. However, in order for them to germinate, careful care will be required. At first, the cuttings will need regular watering.

This plant can be propagated and seeds. In August, when the shrub begins to bear fruit, collect the seeds. Sowing is best done in spring or early summer.

Varieties of skumpiya for the Moscow region: photo and description

Total known 2 kind of skumpii: normal, or tan and American. The latter prefers mountainous, rocky soils. It looks like a small shrub with several main stem branches. If you slightly scratch the trunk of an American bush, a resin with a pungent odor will immediately stand out from it. The bark of adult shrubs exfoliates, starting from the base. In the autumn the plant bears rare berries. Like all members of the genus, the shrub changes its foliage throughout the year.

The American species is more pronounced than its European relative. It tolerates drought well and can grow even on dry stone soils.

Varieties of skumpiya for the Moscow region should be resistant to cold.

These include tannery and yellow species. The latter is a tree whose wood is used for decorating furniture. Leather skumpiya in areas near Moscow is much more common. All due to the fact that it is more resistant to cold than its relatives. Looks like a two-meter shrub or a small tree. When damaged, it produces white juice. Shoots - red-brown color.

Now, having familiarized yourself with the description of varieties of skumpiya for the Moscow region, you will be able to please your plot with a new, unusual shrub. Remember that the main criterion for selection is the frost resistance of the plant.

Pay attention to the photos of various varieties of skumpii: