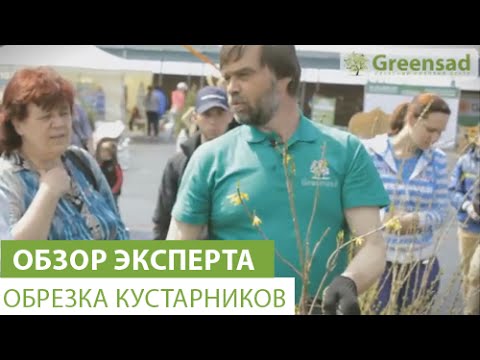 The main goal shrub trimming (both decorative, and fruit and berry) - removal of damaged branches and making the garden decorative by forming beautiful crowns.

Even if you like dense, thick bushes, through which you can’t just get through, you can’t even consider anything, you still have to take measures to prevent excessive thickening, otherwise the plants will die when there is a shortage of sunlight.

When pruning and shaping shrubs, you can get a number of decorative forms. For their removal you need to use young plants that are not infected with diseases or pests.

This article focuses on how to properly trim bushes to form a beautiful, healthy crown.

How to trim the bushes to form a hedge

The simplest and most common in the garden plots decorative form - green hedges. To get a free-growing hedge, plant a red or golden currant, honeysuckle or japanese quince. Cut the bushes very low - so that 2-3 has well-developed buds on the stumps.

It makes no sense to leave old branches - they will not give a good result. From the regrown shoots, select only the strongest, and remove the weak ones, no matter what the temptation is - thickening of the bushes is unacceptable!

In order to preserve the fruiting, when forming the crown of shrubs, the height of the hedge should be determined by the biological characteristics of the variety, because shortening the gains will lead to yield loss. It is possible to trim only too strong gains.

The following year, when pruning fruit shrubs, all weak shoots need to be removed again, and from the strong shoots, leave only the 2-4 successfully located. And so every year. When on old shoots the increments become quite short, they are cut out completely or transferred to side branches. It happens around 6-7 year.

To cut such shrubs, like golden currant, you need the same way as ordinary ornamental bushes. Plants are planted every 50 see. For a wider hedge, seedlings are placed in a checkerboard pattern, the distance between them in a row is maintained. In the first spring the plants are cut short.

Further they grow freely. The following year, in the spring, strong pruning is again carried out, about half the increase of last year. This is necessary to form a beautiful, dense arrangement of shoots. The higher the fence becomes, the stronger the need to shorten the shoots.

In order to not expose the bottom of the shrub, the green wall in this place should be slightly wider than at the top - that is, in the cross section to have the shape of a trapezium. And of course, you need to remember that the appearance of a molded hedge needs constant care: young plants are sheared once in spring, adults - 2-3 times per season.

For honeysuckle suitable option as a molded hedge, and freely growing. Obviously, in the latter case, when pruning these decorative fruit shrubs in the spring, no special work is required to obtain a given shape. And the entire formation of such fences is reduced to the removal of sick and dried branches.

Japanese quince used only in clipped hedges. Pruning does not affect the fruiting of this fruit shrub, because the flower buds in the upper part of the shoot are either not laid, or are still damaged during the winter. The main flowering and fruiting occurs in the lower and middle parts of the bush.

If you really want to grow varieties that have a high spreading bush, then you can form such shrubs on the trellis. Plants are planted less often - at a distance 1-1,2 m from each other.

Actions are performed, supports must be installed at the edges of the row. Stretch a few rows of wire on them with an interval of 0,5 m and evenly fix all the shoots on it.

Pruning and shaping the crown of shrubs on the trunk

It is not difficult to form a shrub on a shtambe. Of course, by their nature they are not inclined to grow into one trunk, and will do their best to “convince” you of this. But there are plants with which it is quite possible to carry out such manipulations.

Of course, honeysuckle is unlikely to be raised on shtamb, but red currants and especially golden currants are an ideal material for such work: branches of zero order live with them for a long time, branching is weak, root shoots give little.

When these shrubs are formed on a shtambe, after planting, all existing branches are pruned. When young shoots grow back, you need to choose one of the strongest and most vertically directed; the rest is completely cut. When the branch is left the right size, it is cut and form a crown.

For shrubs, it is enough to leave a stem with a height of 70-100, see. At the same time, all shoots and buds are removed on the trunk, except the uppermost ones - the crown is formed by nipping growing shoots after the 2-3 leaf. It is not necessary to leave a very large number of branches in the crown.

Get the crown at the desired height and by grafting. Having received the stem in the manner described above, in the early spring, when the buds have just swelled, plant the stalk of the desired grade on it. Take a stalk with 4-5 kidneys, they all germinate in the first season, and the crown will form quickly enough.

Japanese quince can also be obtained in the standard form, but in this case the process of formation has its own characteristics. It is unlikely that it will be possible to remove the stem from the branches of the bush itself, therefore pear seedlings or mountain ash are used as a shaper for it. Seeds of these crops sprout well in autumn sowing in the ground and with good care grow quite actively.

Rowan seedlings grow faster than pears, and in the very first year they can reach 40 cm and more. Depending on the desired height of the trunk, an inoculation can be made on one-year or two-year-old seedlings. The grafting is carried out by cuttings into the butt or laterally in the spring.

Thus, forming the crown of fruit bushes on the shtamba, you need to ensure that it is uniform, as well as timely cut out the diseased and damaged branches. And, of course, you need to install support. The branches of the bushes are not so strong as to keep the crown in an upright position, and even with the crop.

Pruning shrubs in summer and autumn

According to the rules of pruning shrubs when caring for plants, first of all you need to remove the old branches, the fruiting on which is already becoming smaller. Red currant and honeysuckle remove branches older than 7-8 years. When pruning fruit shrubs of golden currant in spring, branches older than 10 years are removed. If it is a molded hedge, then it should be mowed in accordance with the given shape.

During the summer, the garden should not be left unattended either. At this time, the trees carry out the breaking of tops, pinching strongly growing shoots to form fruit formations from them, cutting badly damaged branches. Adult hedges periodically trim.

In the summer, the main pruning of berries and ornamental shrubs such as Actinide. This work begins after flowering. On actinidia remove old branches and some growths of the current year, which thicken the bush.

In the autumn, sanitary pruning of ornamental shrubs is carried out. This procedure should be planned for the end of October, when the plant enters a state of rest. Pruning of other crops in the autumn is not worth doing - it reduces their winter hardiness.