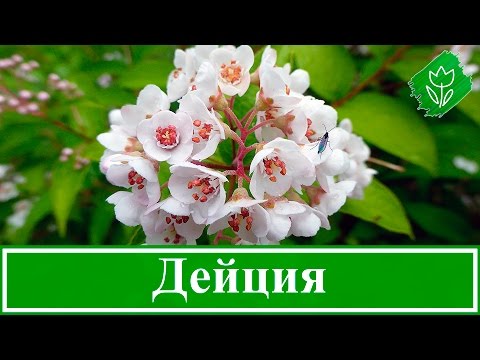 Deytsiya (Deiitzia) - very beautiful shrubs, characterized by elegant and rich flowering. Different species reach heights from 0,5 to 4. In gardening, they most often use a rough deacon (D. scabra) that grows to 2. Leaves to 10 are cm long, rough, like emery paper. Flowers bell-shaped, collected in the brush. Flowering ornamental shrub actions in the middle of summer, effectively and for a long time.

There are decorative terry forms of Candidissima with snow-white flowers.

full with white flowers, the outer row of petals is colored purple, etc.

They are less winter-hardy than the action rough and require serious shelter.

Peculiarities of cultivation: deedia are preferred by fertile soils with sufficient moisture, the plants are resistant to diseases and pests, grow well in urban conditions. Propagated by cuttings, seeds. In the middle lane, actions are in need of shelter for the winter. To do this, they spud, and the branches are bent down, pinned to the ground, sprinkled on top of fallen leaves or other materials.

Despite the exceptional beauty, due to the low winter hardiness, it is risky to use the action when it is required to have a stable decorative effect from the plant. Each gardener chooses the plants that he likes.

To appreciate the luxury of certain types and varieties of action, view the photos below:

Types and varieties of deytion: photo and description

This perennial has more than five dozen species distributed in Mexico, East Asia, as well as on the slopes of the Himalayas. The well-known botanist Thunberg first saw a gorgeous plant in Japan and came up with a name for him - he named Johann van Deutz, the mayor of Amsterdam, who sponsored a maritime expedition to the East, and was always keen on floristics.

Before reading the description and description of the action, look at the photo to make sure its attractiveness:

Some external signs of a plant that make it easy to recognize:

The average lifespan of a plant is approximately 25 years. The peculiarity of Deiitzia, inherent to many other members of the genus, is the detachment of the cortex. If you look closely, you can see under the buds of dark branches with scales, hanging like rags. This is a natural, natural phenomenon for mature deiitzia specimens.

Among the cultivated varieties and types of deuterium there are those that are most often used in the design of homestead land, parks, ale. The following are the most popular samples:

Deiitzia amurensis (small color). It has a gorgeous crown. Brown bark after a time acquires a grayish tint. Leaves elliptical, pubescent on both sides. In the spring and summer they are dusty or bright green; by the autumn they become brown and ocher. White flowers appear in the last decade of June, remain fresh for 3 weeks, then box-shaped yellowish fruits are formed in their place. Variety endures drought, smoke.

Deiitzia gracilis (graceful). Bushes with height from 0,5 to 1,5 m. The shape of the crown is rounded, the branches are arched, thin. The leaves are light green, lanceolate (about 6 cm long). From the seamy side they are smooth, and the front surface is covered with the edge. White flowers are organized into erect 9-centimeter tassels. Blooms profusely, begins in mid-July, lasts for 1,5 of the month.

Deiitzia scabra (rough). The shrub has a reddish-brown bark that gradually exfoliates. Elongated leaves (3-8 cm) are covered with stellate hairs, giving the surface characteristic roughness. This is a late blooming variety. Inflorescences with a diameter of 12 cm remain attractive for 2-3 weeks. In D. scabra there are decorative forms (white-dotted, terry, Vaterer, etc.).

Convince yourself of the enchantment of this variety of action by looking at the photo.

Deiitzia magnifica (gorgeous). Hybrid variety, which is a beautiful erect shrub 2,5 m in height. The leaves are elongated. Terry flowers are grouped in umbrella brushes up to 10 cm long. Flowering rich, long.

Deiitzia longifolia (long-leaved). 1-2-meter bush with fleece shoots. The edges of the toothed leaves are saturated green, their inside is greyish. Lilac-purple buds open in the last decade of July.

Deiitzia lemoinei (Lemoine). Abundantly blooming hybrid. Height - up to 2-m. Blooms with snow-white or bright pink tassels. It has many ornamental subspecies (for example, Boule-de-Nege, Mont Rose, Pink Pompon). All of them are resistant to frost.

After reading a detailed description of the varieties of action, read the photos of these wonderful plants:

Shrubs are propagated in traditional ways, the most common of which is grafting. Good planting material is obtained from developed, healthy, half-woody shoots. The procedure is performed in June:

In the spring, young saplings are sent to a permanent place - the key features of growing deuterium look at the photo:

You can also grow deuterium with seeds. They are sown superficially, sprinkled with a thin layer of sand, covered with glass. Water 2-3 times / day, using a fine spray. Early shoots are shown after 1,5 months. When leaves appear on them, the plants dive into suitable open soil.

The division of the bushes is the most elementary method of vegetative reproduction. The adult specimen is dug, carefully cutting the root system into several segments with a secateur. The planting of the deuterium and care in the open field is carried out immediately - according to the general rules (they will be discussed later).

Planting and caring for shrub deytsiya in open ground

For the shrub of the action, the care and planting of which requires attention, slightly shady areas under the canopy of deciduous trees are suitable, since there is maintained optimum air moisture and diffused light is present.

It is advisable to avoid areas prone to drafts. The plant prefers rich, medium moisture soils, loams. He will enjoy the soil mix consisting of the following ingredients:

To this mixture is sometimes added nitrophoska. If the soil is acidic, then slaked lime is added. In the presence of close standing groundwater necessarily provide high-quality drainage. The planting of a shrub deytion is started in the spring - during this period the probability of its successful adaptation is very high. The depth of the landing ditch is 0,5 m, a small layer of sand or gravel can be placed on its bottom.

What should be the landing pit, designed for shrub deytion, look at the photo:

Strongly deepen seedlings can not, their root isthmus should be flush with the ground. The distance between the bushes is 1,5-2,5 m, and the width of the row spacing is 2 m. After planting, the plant is watered generously, the space near the stem is compacted, covered with peat mixture (layer - to 7cm).

Look at the photo for some stages of planting and caring for it - they will serve as visual material for novice gardeners:

In order for the bushes to fully perform their decorative tasks and delight the eye as long as possible, care should be ensured for regular and competent shrub bushes. Attention should be paid to such points:

How to properly provide such care deity, look at the photo:

Planted transplant the plant only in the spring. The bush is carefully dug together with an earthy clod, sent to a new trench, previously well drained and fertilized. After transplantation, it is recommended to cut off old branches, young shoots should be cut to 1 / 3 lengths.

Deytsiya in landscape design is used today more and more often, the reason for which are its unpretentiousness, excellent decorative features. As curb plants are used low-growing types of deuterium, other varieties look great along the paths and alley. They are planted in one copy or in groups. From tall varieties successfully form live enclosures. Due to the fact that the plant almost does not suffer from negative factors and conditions of megacities, it is actively used for the design of park areas, squares.

Magnificent flowering, elegance of brushes and foliage of action give the plantings exceptional elegance. Often the shrub is introduced into the composition of complex herbal compositions.

Best of all, it is combined with such colleagues as Badan, Goryanka, the host, and saxifrage.

All of them bloom simultaneously, and the action provides a delicate light line between the contrasting shades of their neighbors.

Look at the photo how effectively the lovely action in landscape design looks:

Despite the fact that in the domestic flower beds the action appeared relatively recently, she managed to catch the fancy of gardeners, she is actively involved by designers in the process of creating original landscape works. The main advantages of the plant are elegant, long flowering, a wide variety of forms, parameters, excellent compatibility with other representatives of the decorative flora.