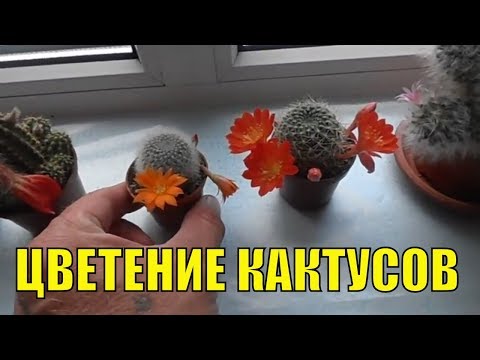 Flowering cactus fascinates with its originality and beauty. Unfortunately home cacti bloom They are given extremely rarely and only in cases when they are provided with special care. But with the knowledge of the basic rules of agrotechnology, this process can be accelerated. It is possible to stimulate the flowering of cacti at home both using special techniques and using chemical biostimulants and mineral fertilizers.

How to make a cactus bloom at home with the help of proper care, all the secrets of this process can be found in this article. If you use this knowledge in practice, the window sill will turn into a blooming garden.

Look at the flowering of cacti in the photo - this beauty is worth it to make efforts to organize the proper care of the plant at home:

Why does not cactus bloom at home

All beginner cacti growers complain that, although their cacti grow well, they almost do not bloom. Therefore, below we will briefly consider some aspects that may have a definite value for flowering or lack of flowering of cacti. If you want to know why the cactus does not bloom at home, read the article below.

Some cacti even in their homeland bloom only upon reaching old age and being very large plants. This applies primarily to many columnar cacti. Seeds of such columnar cacti are available in packages with a mixture of cacti seeds, since they germinate very easily, and young plants that grow from them have relatively rapid growth. However, it is not worth expecting flowers in these cacti in room culture.

Some cacti, although they bloom upon reaching those sizes that are quite possible in room conditions, but require a lot of light and heat for flowering. So some vacationers bring from the Mediterranean a segment of acclimatized and wild-growing Opuntia there, and it is possible that attractive plants will grow from these cuttings. However, the appearance of flowers in such plants can be expected only under particularly favorable conditions. The same applies to trichocereus; so the children of Trichocereus schickendantzii are constantly transferred from one cacti lover to another and grow in collections into whole curtains (groups). However, only relatively large plants bloom with precisely balanced nutrition and very good culture conditions.

When and how often cactus blooms at home

How often the cactus blooms at home depends not only on the type of culture chosen, but also on the organization of proper care for the succulent. The time when the cactus is blooming at home, you need to record and count from it until the next budding period. So you can make a calendar of flowering homemade succulents.

Cacti that are suitable for indoor culture also become capable of flowering only upon reaching a certain age and a certain size. In this respect, there are significant differences between different genera and species. Some rebutations bloom as early as the second year after sowing seeds, many mammillaria, notocactus, loivia, and hymnocalycium - into the third or fourth, but some ferocactus and trichocereus bloom for the first time only after 10 — 15 years after sowing.

What cacti bloom at home

Like other plants, cacti among representatives of one species also have both good and poorly flowering specimens. Rarely flowering specimens often form lateral shoots, called "kids", which gladly pass from one cacti lover to another. As a result, it is spreading poorly flowering plants. This applies, for example, to certain species and varieties of echinopsis (Echinopsis). What cacti bloom at home, you need to know in advance to choose the right species in the store.

Most of the cacti offered by flower farms and flower shops easily and abundantly bloom in room culture as well. As an example, cacti of the genera Marnmillaria, Notocactus, Echinopsis or ebutia can be mentioned. If these themselves are good and strongly blooming cacti stubbornly do not bloom, in most cases there is an error in culture. Most often it is non-compliance with the rest period necessary for plants. In almost all cacti, the budding of flower buds occurs only when in the winter they are kept significantly cooler and completely or almost completely dry. In spring-bloomed species and varieties, this dormant period must be maintained until the buds become well visible. If start water the cacti prematurely, plants start growing too early and the buds stop growing. However, once the buds have reached a certain size, watering the plants should begin.

How to care for cacti so they bloom

Before as care for cactiin order for them to bloom, you need to know that during the growth period, cacti need only be watered and fed with fertilizer. Cacti growing in a substrate that is almost devoid of nutrients, such as sand or crushed stone, and which practically do not water or fertilize, cannot bloom. In addition, the type of fertilizer used is also important. Top-dressing with fertilizer with too high percentage of nitrogen stimulates vegetative growth, and the plant in this case blooms badly.

In some cacti that bloom in early spring (as an example, some mammillaria, rebution, or echinocereus) can be seen in many buds only if they are kept in a bright place in winter. However, to pick up for such cacti, on the one hand, cool, and on the other - a bright wintering place is not always easy. A suitable location for them would be a bright window of a cool staircase.

How to care for a cactus to make it bloom

After laying flower buds in cacti, it is necessary, as far as possible, not to change their position relative to light. So "Christmas" and "Easter" cacti after a change in the direction of light tend to drop buds.

Before you take care of the cactus to make it bloom, you need to know that when growing this plant on the windowsill, you should note the direction to the light by putting a strip on the pot with a pencil.

on Facebook
Twitter
In contact with
Google+
SIMILAR ARTICLES:
Cacti and succulents in nature
Growing and caring for cacti at home and in the greenhouse
How to care for cacti in spring
Strauss cleistocactus - simple care, beautiful view