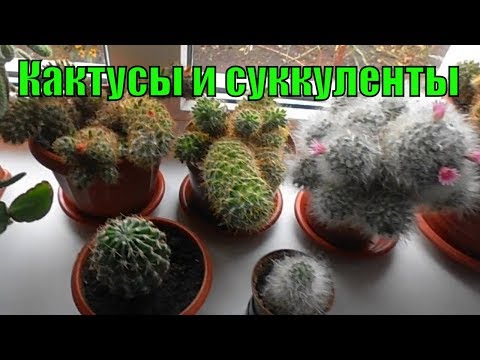 Reproduction of cacti is not difficult even for novice grower. These plants root very easily and can even be reborn from a piece of leaflets. Breeding cacti at home is most often carried out by dropping off the children. Similarly, can be reproduced succulents that have the ability to give roots even from a small stalk.

Seed breeding method of these crops is rarely used. These techniques require mandatory pollination of the plant during short-flowering. Make it at home is impossible. Therefore, the easiest way to carry out the breeding of succulents in the home vegetative way. How to do this - read the proposed material.

Look at the colorful and unusual flowering of the cactus in the photo - from such luxurious buds in the future seeds will appear, but only if they are pollinated:

Time and conditions of flowering cacti

Flowers give cacti a special charm. In contrast to strong and powerful stems, cacti flowers are very tender and short-lived. After all, they only need to attract pollinating insects to themselves in one or several sunny days, and this will complete their task. The flowering conditions of cacti are such that the buds develop very slowly, often over many weeks. But then the buds of plants of the same species open almost lightning, and often all at once in one day.

With a short flowering time of cacti, it should be so, because otherwise pollination will not occur. In a single plant, it seems understandable when internal processes contribute to the simultaneous development of flower buds.

But in order to grow in the same area, various plants of the same species bloom at the same time, it is necessary to have external stimuli that have the same effect on all plants. The temperature conditions of flowering and the amount of moisture, as well as light exposure, may well differ at a relatively short distance. However, in a region stretching for many kilometers, the duration of daylight hours remains the same, which varies with the seasons. Apparently, this is the most accurate clockwork for flowers. Today it is already known that plants with certain red pigments can accurately record the length of daylight.

Bright red flowers with a narrow floral tube, such as those of glue-drainage, on the contrary, are typical flowers pollinated by birds. White flowers with a very long floral tube, which bloom at dusk, have a strong aroma and form a lot of nectar, mostly pollinated by nocturnal butterflies. All flowers of cacti with their large number of stamens contain a lot of pollen.

However, nectar is also found in the base of the flowers, often in almost isolated chambers.

After pollination, a lot of seeds are formed in dried fruits or juicy berries. Like all other plants, the seeds of cacti need a lot of moisture to germinate. True, seedlings of almost all cacti develop from the very beginning as succulents and are distinguished by slow growth. Despite the fact that usually cacti form a lot of seeds, in dry areas the conditions for germination and development of seedlings are very unfavorable. Breeding cacti by seeds is a very long and difficult process.

Often for many years, seeds cannot germinate at all, or after a short period of time, all seedlings die. However, the seeds of cacti, as a rule, remain viable for a long time. In favorable years, a lot of seeds germinate, but subsequent years are also of great importance for the normal growth of seedlings. Moisture in the stalks of young succulent plants consumed relatively quickly. Because of such unreliable seed reproduction in succulents, and thus in cacti, vegetative reproduction is of great importance.

Reproduction of cacti and succulents by children, cuttings and leaves

Many small cacti, such as some mammillaria, form entire clumps. In other species of Echinopsis and Mammillaria easily breaking off lateral shoots are formed - children. Therefore, the multiplication of cacti by children in some cases is the most preferred method.

This ability, which consists in the fact that, in principle, every part of a cactus that has at least one areola can take root and grow further, cacti-growers use during reproduction of succulents by cuttings for rare plants.

The next distinguishing feature of the breeding of cacti cuttings is their close relationship. As a result, cacti - often even very different looks - easily interbreed with each other. Under natural conditions, this does not happen so often, since certain species are often spatially separated, that is, they grow at a certain distance from each other; different species grow, for example, in different valleys, or their flowering time does not match for more than a day. However, representatives of the same species of cacti sometimes look extremely unsuitable.

In many species, such as, for example, lobivii, in one place there are plants with flowers of different colors. As for the rest of the typical for this type of signs, such as the number and length of thorns, here, on the contrary, it is impossible to immediately say which deviation is hereditary, and which is caused only by environmental conditions.

During the reproduction of succulent leaves with leaves, pollination is possible only if it was previously a flowering period.

Even more convincingly the close relationship of cacti is manifested in the fact that, in principle, all cacti can be grafted onto each other; that is, the graft, and the stock grow well together. In the plant world, this ability is not at all natural, since even an apple tree and a plum cannot be grafted onto each other. At present, it remains to be seen whether such intergrowths play a practical role in nature, for example, in the region of the root system.

on Facebook
Twitter
In contact with
Google+
SIMILAR ARTICLES:
Cacti and succulents in nature
Growing and caring for cacti at home and in the greenhouse
How to care for cacti in spring
Strauss cleistocactus - simple care, beautiful view