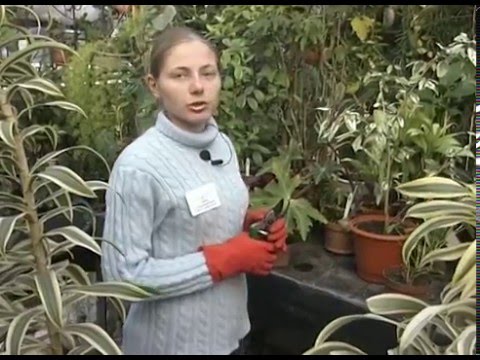 For some reason, some room growers believe that only street crops should be cut and tied, and those living on the windowsill do not require such agro-events. This is a profound error. House Flowers need pruning as regularly as their garden relatives, otherwise they will stop giving new branches. And in the case of excessive growth without a garter to the support houseplants and completely "run away" from the pots.

Some cultures put a beginner grower to a standstill with his problems or develop very well if he is familiar with some of their features. Next, you will find tips on how to cut home flowers, and how to tie tall and climbing plants to a support.

There are a number of good reasons to periodically crop some of your flowers. One plant should be thicker, a drooping specimen should be prompted to form new shoots, and an oversized plant should be returned to acceptable size.

Important for proper trimming of houseplants are the following techniques:

It is possible to count on good flowering of some flowering plants only when at the beginning of the growth period (most often the end of February / beginning of March) you significantly shorten all the shoots. Calmly cut from a quarter to a third of the length of the shoot.

As a result of this operation, plants form side shoots more intensively. On young shoots laid a lot of flowers.

What caused the dying in front of a plant, improper care or choice of location, it does not matter. As a result, there is a drooping specimen, which retained several leaves only at the tip of the bare stem.

With such poor people should not leave too early. Some of them can be reanimated by pruning. This is done with the rubber plant ficus, philodendron, various dried ferns, Dieffenbachia and passionflower (Passifiora caerulea).

Exception: ferns must be trimmed just above the edge of the pot.

How to cut tall potted flowers

In general, you should be happy when your pets reach large sizes. But when they approach the ceiling, the question arises: “What should I do?” It’s a pity to give to friends whose apartment has higher ceilings. Only one way out - to shorten the giants. This is possible, though not always.

Plants with woody sprouts, such as Ficus euastica (Ficus eiastica), can be shortened in the following way:

Quietly shorten the plant immediately to 1 m, otherwise after some time you will face the same problem. Heavily branched plants with soft shoots can be cut with scissors anywhere. Shorten not only the central shoot, but also the long side, and cut tightly above the leaf node.

Pruning such household plants as ordinary ivy (Hedera helix) and some others will not cause much trouble. At any time you can cut long shoots with scissors.

Tall plants with a trunk and branches, such as yucca and some species of dragon, already present some difficulties. You can cut off the top side shoot first, but this will only help for a short time. It is better to trim the upper part of the trunk. The cut after that needs to be sealed. For this purpose, specialty stores have special pastes that are simply applied to the slice.

The most difficult is the case with palm trees and giants like them: their above-ground parts cannot be touched at all. Palms can be held back for several years by cutting roots with transplanting. For other plants, there are only two ways out: either move to an apartment with high ceilings, or donate.

Have you already seen in the flower shop beautiful plants on high trunks that have come into fashion in recent years? Something like that you can grow yourself. It will take only patience.

Most of these tall plants need support. Just install the prop.

When trimming indoor flowers should observe the following rules:

But after a month's 2-3, it's nice to look at them again, although they have become smaller.

Radical pruning weakens a living organism. Therefore, you should not shorten the plant during transplantation. Both can simultaneously be higher than his strength.

Regular collection of wilted leaves and flowers should become a habit, as watering и top dressing. This is necessary not only to make the plant look well-groomed, but primarily because the faded parts of the plants can cause diseases. First of all, they contribute to the appearance of mold.

Faded flowers on long stalks should be cut as low as possible, at the very base.

In some plants, such as alpine violet (Cyclamen regsicum) or bottle of violet (Saintpaulia ionantha) they just come off in a sharp movement.

Faded flowers on short pedicels growing on shoots, most often you can tear off your fingers.

Faded leaves are usually removed just like flowers. It is somewhat more difficult to remove individual leaves covering the stem, as in dieffenbachia.

In such cases, take a sharp knife, better clerical (with a razor-like blade) and cut the sheet as low as possible. Let the residue stand until it dries to such an extent that it can be easily pinched off. To denote the process of removing wilted leaves and flowers, there is a botanical term: “cleansing”.

Some plants tend to reach the top. But they would look much better if they grew more bushy, had more side shoots.

Trimming the tops can help. This means that the tops of all shoots are cut off and only two or three upper leaves. This does not necessarily require scissors, you can pinch off the tops of the nails. You will achieve the greatest success with young plants that are still developing intensively. Young plants that have been obtained from seeds or cuttings must be repeatedly removed during the first months. For cutting the tops of the shoots of tall plants, the optimal time is the beginning of the growth period.

Crop before the beginning of the dormant period in September or in February / March - without the sun the covering leaves are not painted.

Allamanda (Allamada cathartica). In early spring, shorten the long shoots by about one-third - cut off the tips of the shoots as cuttings.

Hypocirta (Hypocyrta glabra). In the autumn, after flowering, shorten, which contributes to the formation of new shoots and tillering - in winter, to form a color in a cool place.

Some species that in nature cling to large trees grow much better in a room if they are given adequate support.

Moss support. Plants that grow aerial roots, such as philodendron or Monstera (Monstera delidosa), they feel especially well on a support made of moss, into which these roots can penetrate to obtain additional nutrition (water).

These supports in finished form can be purchased at a flower shop or make yourself.

In order to make a support for indoor flowers do it yourself:

To support for indoor flowers also served as a power source, it must be moistened daily with water from a spray bottle.

Wire arch or rattan is important for plants with long shoots, such as stephanotis (Stephanotis floribunda), diplomatic rights or jasmine. Such arches are simply stuck in the pot on the left and on the right. Most often, the shoots do not need to attach, you only need to twist them slightly around the wire.

Garter houseplants to rods and trellis

For tall plants, such as aralia (x Fatshedera) and others, bamboo rods are ideal, which should be installed during transplantation. If they are inserted into the ground after transplanting, plant roots are affected. Tie the stem or shoots to the support. Do not overtighten as shoots and stems should be able to continue to grow.

Some plants show all their beauty only in the case when they are tied to lattices, trellis. These cultures include common ivy (Hedera helix) or cissus (Cissus).

Tapestries come in either green plastic or bamboo - the choice depends on taste.

Plants require special care (which develop in their homeland as epiphytes, that is, on tree trunks. Of houseplants, for example, tillands и Platitserium, or deer horn (Platycerium).

Indoors, you must bind these home flowers to the appropriate support. Plants are fixed on a thick branch in the following way: